What we discovered at NAB 2022

We came. We saw. We conquered. Yes, finally – after what seems like a very long time – the Bridge team escaped from the offices on the banks of the Akerselva river, hopped on a plane across the Atlantic, and got busy doing what they do best – rubbing shoulders with the best and brightest of the broadcast world (not to mention the funniest and most fun-loving). NAB 2022’s tagline really caught the gist of it; you look better in person – and everybody really did.

But what was perhaps the most interesting about NAB 2022 was that it gave everybody the opportunity (or perhaps more accurately for some, forced us) to take a proper look at where we are – technology wise – three years down the line, after a monumental paradigm shift that has fundamentally affected the way we use technology, and what we’ve come to expect of it. Sure, we’ve had all maintained a nebulous feeling of the trends emerging as a result of lockdowns, social distancing, and working and learning from home; indeed, at Bridge we’ve been blogging about them on a monthly basis. But NAB 2022 represented the first time we could really see all these elements in one place. And it was quite a sight to behold.

No more New Kids on the Block

IP is here to stay. There’s no more sitting on the fence about it – even the greatest luddite amongst us (you wouldn’t think you’d find luddites at a technology show, but they’re there, we promise…) can’t deny the IP revolution isn’t just approaching – it’s here. In a way, we’re kind of sad; we relished our position as evangelists banging the IP drum, ahead of the curve. Of course, we’re still leaders of the pack, but we kind of liked the good-old-days where shouting about IP in broadcast resulted in some pretty funny looks.

Now, everybody gets us when we talk about IP. Knowing nods. And that’s a good thing really – or at least it certainly seems to be given the immense amount of attention our IP monitoring products were receiving at NAB 2022 – particularly our VB440. (Did we happen to mention we picked up the ‘Product of the Year’ award for Remote Production? No? Ah well, you know how modest we like to be…).

And on the subject of remote production… 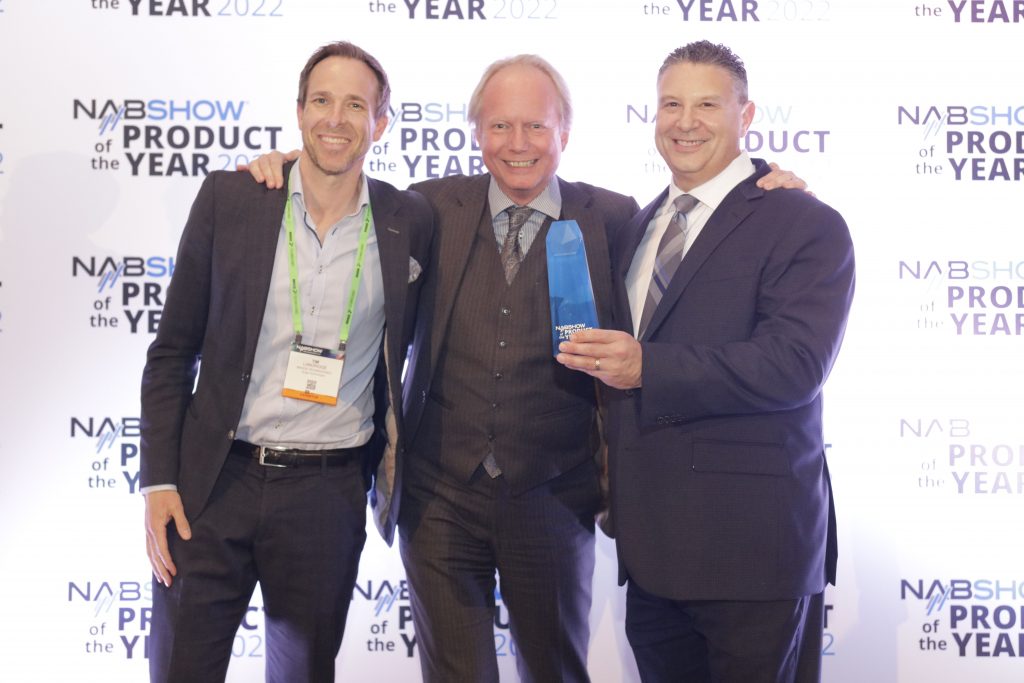 Picture: Tim, Simen and Eric Trabb pose with the ´NAB Product of the year award´ for the VB440 Signal Generator

There’s no going back

It turns out, everybody quite likes working in their pyjama’s and is happy to avoid packing themselves onto trains like sweaty sardines five days a week. Who knew?

This means that the demand for internet media has never been higher, and it’s only going to grow – both in terms of quantity and quality of demand. And that means that now more than ever content providers need to employ the highest level of monitoring in their operations; providing not only for in-the-moment trouble shooting, but also for the strategic management of networks at a macro and boardroom level. Fortunately, at Bridge, that’s exactly what we’re offering.

And it also turns out business accountants have smiley faces when the budget doesn’t have to accommodate flying twenty sound guys and gals and an endless parade of camera painters and producers out to a remote village in Nepal just to cover the latest extreme sporting event.

Which means that the pressure is on for broadcasters to find ways to facilitate real-time, joined up production that maintains – even pushes – all the standards that audiences have come to expect, but in a way where this can be undertaken across vast and often disparate distances. And again – somewhat fortunately – at Bridge that’s exactly what we’re offering.

Indeed, taking our VB440 for a run ‘out in the wild’ was perhaps one of the things we enjoyed most about NAB 2022. We’ve been working on a basis of continuous improvement with the VB440, constantly adding more and more functionalities over the last two years. But the nature of online communication means that these advancements are drip-fed to the wider market, making it difficult to show just how comprehensive and feature-packed the VB440 truly is. Resultantly, NAB gave us the opportunity to demo to audiences how much functionality is packed into just one product; accessible from any HTML5 browser. It means we could give customers a chance to see just how much rack and monitor space they could save (not to mention associated energy consumption and money) – a true visual understanding of the difference VB440 technology makes in places where space is at a premium. Now that we’ve convinced the world of the benefits of IP, our next mission is to show them how IP is ringing the death knell for single function products.

As such, we had a whale of a time demoing how the VB440 performs the work of 20 rack blocks, with all of the depth and breadth of function, no compromises. This include the 7:1 audio downmix feature allowing sound engineers to preview sound remotely across 64 channels using just a set of headphones (along with visual analysis through Gonion and LUFs meter), as well as the extensive HDR/SDR visualizations we’ve developed that allow camera painters to engage with both colorimetry and actual visual preview of HDR images, even with only an SDR monitor. We demonstrated the JPEG-XS capability, Packet Caption and Closed Caption Functionality, the integration of SR Live Metadata display, and – most exciting for us – also demonstrated our newest development: the NAB 2022 award-winning Signal Generation. The latter is the ability to generate placeholder signals in order to engage in more efficient studio setup, with no need to unpack cumbersome and expensive equipment. 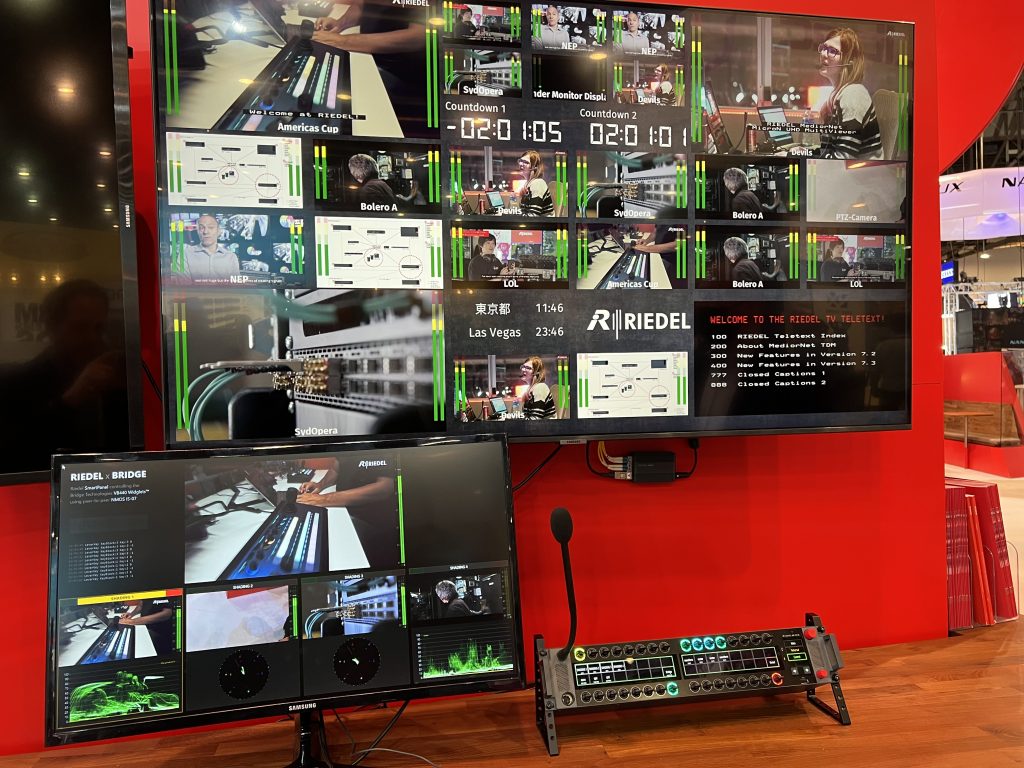 People visiting on the booth had a hard time understanding how we could fit so much in such a small space (to be honest, we sometimes wonder how we do it ourselves…).

The world of technology marches on

Key themes at NAB were, of course, 5G and Cloud-based technologies, along with NextGen TV (ATSC 3.0) and the ever present spectre of AI (or at least what technology firms like to call AI). The broadcast world also seems to have gone PTZ camera mad, but that’s not surprising given that multi-million pound studios had to be condensed into the front rooms of chat show host’s living rooms over the past two years (though let’s face it, Jay Leno’s front room is probably a lot bigger than your average studio anyway…).

But the great thing is that at the heart of all these technologies lies Bridge products – pulling them all together, measuring and monitoring complex network systems full of an endless array of technologies, network structures, stakeholders, and making sure that everything runs smoothly – regardless of how quickly technology marches on.

We’re all in this together

Our role as IP evangelists (and the endless charisma that our Chairman Simen Frostad particularly can bring to any stage) has meant that we’ve been an active contributor to a few important alliances; the Grass Valley Alliance, SRT Alliance and SR Live Alliance being three notable mentions. Along with the ability to drop in on our Business Partners for coffee or a beer, we valued the ability to reinforce not just our business relationships but the friendships and elements of real human connection which underpin them. Alliances particularly are one of our favourite features of shows, because they show that whilst in theory many of us are there as competitors looking for their share of the market, ultimately, we’ll all directed towards the same goal – pushing broadcast technology forward. For us, collaborative competition is the way forward. 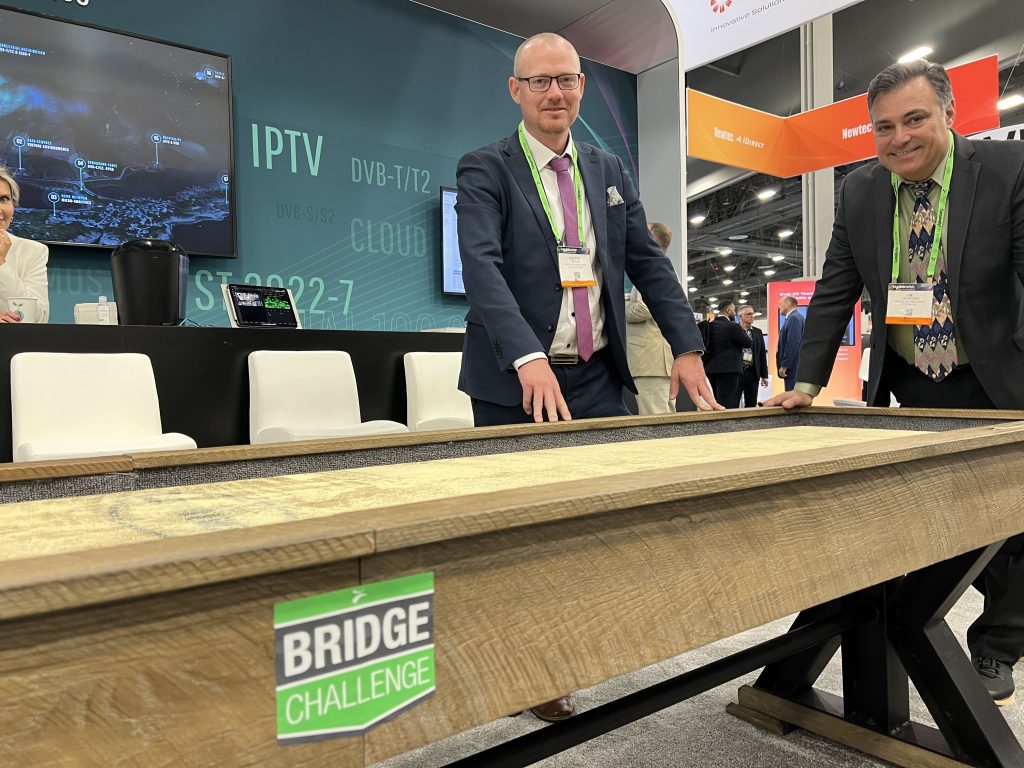 Picture: Philippe and Joe (2110Solutions) finish a game of shuffle board. Looks like it was a draw.

There ain’t no party like a Bridge Tech party

Of course, if there’s one thing we didn’t need reconfirmed – it’s that at Bridge Technologies, we’re inherently social animals. Whether it was at our relaxed Top Golf dinner for our friends and business partners, or across our immensely popular shuffle-board that constituted the centerpiece of our (remarkably understated) booth, we were just so happy to be talking with people in person. Evenings out at the Parasol bar, the usual round of cigars and champagne, zooming around on the Tesla Loop (25 minutes down to just two) – whatever it was we were happy to be out and about in person, sharing stories and smiles with old friends and new.