Whenever we talk about satellites in the context of our industry, we’re mostly talking about DTH – widescale distribution to homes. In Germany, for example, satellite DTH is the primary method by which households receive HD programming, accounting for over 13 million customers. Similarly, it’s the most widely used in Australia with a 57% market share.

That means that it’s all too easy to overlook another part of the satellite market – the VSAT (very small aperture terminal) market. The big advantage of VSAT technology is that it typically requires less infrastructure, so it is easier and more cost-effective to deploy – making it ideal for bringing content to remote locations.  The applications typically associated with VSAT are, for example, maritime – cruise ships, fishing vessels, offshore installations. Less well known is that it’s widely used commercially. The US retail giant Walmart, for example, uses VSAT for inventory management because so many of its stores are situated in rural locations where communications infrastructure is almost non-existent. Similarly, the National Stock Exchange of India has one of the world’s largest VSAT networks, enabling it to offer access from locations where other options are limited.

It’s perhaps no surprise, then, that the worldwide VSAT market is forecast to be worth over $7.5 billion by 2025. The good news is: it’s a market that we at Bridge are very well placed to address. You probably think of the NOMAD and VB272 as great tools for performing deep inspection of DTH transmissions – but they’re no less applicable in the VSAT world, not least because VSAT relies on much of the same technology as is used in satellite DTH – in particular, the DVB-S2 modulation standard for the downlink portion of the transmission.

Both NOMAD and the VB272 can be used to monitor the RF quality parameters of DVB-S2/ACM transmissions and perform long-term trending on parameters such as received signal strength, link margin and changes in modulation constellation diagram. The latter is used to gear up and down the speed of the Internet link, depending on rain fading and other signal degrading factors such as solar radiation. This is done dynamically and it is of interest to the operator and user alike to be able to inspect how the modulation form varies during the day or the geographic location since it directly affects the Internet download speed.

Of course, deployment in remote locations typical of the VSAT world is one of the applications for which NOMAD was designed. An extremely compact and highly affordable probe. It’s a complete free-standing unit with its own CPU and can be left to monitor signals unattended with no need for a host system – making it ideal for data logging applications. With the newly-released data logging feature, it’s possible to have the system log measurements as often as every five seconds into a log file that is then imported into standard tools such as Excel for further data processing or graphing. 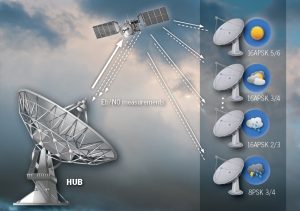 A trend graph can be used over 24 hours of the link margin of the transmission, and logged every five seconds. Also analysed is the dynamic change between different modulation codes. A higher code such as 32APSK means that the signal path is good with little degradation due to rain,  whereas a  lower encoding such as QPSK means the link is suffering from reception issues and needs to gear down in speed to achieve sufficient data reliability. In addition to logging constellation details the NOMAD logs a whole range of other useful RF parameters. Examples include link margin, Eb/N0, MER and channel power.

There’s a big – and growing – market out there for VSAT technology. Yes, in many ways it’s different from our ‘mainstream’ markets – but it also shares the same need to monitor, analyse and optimise network performance. Who better to help VSAT users do that than Bridge Technologies?