It ain’t all about IP (No, we can’t believe we just said that either…)

At Bridge, we’re constantly thinking about Business Strategy – not just our own, but how the very concept shapes the industry we’re in, and as a result, the wider world around us. We don’t want to overstate the matter, but operating in technology fields means being part of something much bigger than yourself; it isn’t (only) about selling your product and satisfying the financial demands of your investors, it’s about recognizing the holistic and interrelated nature of a very complex business ecosystem. The strategic decisions you (and we) make as a business impact those of our competitors, and those decisions collectively impact the direction that the industry takes as a whole. All of that ultimately impacts the technology available to the consumer, the way we use it, and thus the choices and options we have as a society.

To give a (not-entirely-practical-and-slightly-insane) example: imagine if Benz hadn’t thought there is a value – both in terms of profit and social benefit – in putting a combustion engine into a car, thus inspiring all his competitors to. Instead, we’d have had increasing investment in making horses go faster. In 2021, we might not have the Tesla Model 3, but we possibly would have mutant 8-legged horses with in-built navigation systems and heated saddles.

So it seems obvious that there is a weight of responsibility on those who push the industry forward.

But that’s not just a responsibility for the innovators, those further down the chain have an impact too. When competing technologies emerge at the same time, it is those bringing up the rear of the market that decide which (eight-legged) horse they’re going to back: just look at any of the format wars of the 20th century; Blu-ray vs HD DVD, VHS versus Betamax.

This graph demonstrates how technology is generally adopted in markets. 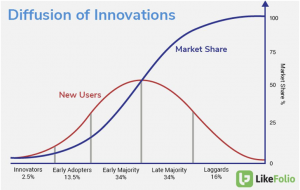 The problem with the graph is that it somewhat gives the impression that any given innovation is definitely going to ‘stick’, and naturally progresses down the path of adoption. But not everything does. Some products start to climb the innovation side of the hill, and then drop like a stone. And not everything lasts- some products shoot through the whole bell curve and out the other end in a flash, whilst some remain there for years. So the reality as a market tracks itself on the curve, there may be a whole muddle of competing technologies and standards mixing about in the middle, creating a clash of hybrid processes and methods.

If you’re a competitor operating in that industry, how do you build a strategy around a market situation like that? Conventional wisdom tells us that companies need to target one segment of the adoption curve. Position yourself as an innovator and it’s great risk for great reward. Mop up in the middle if you have a particular talent for driving production efficiency and lowering costs. But sometimes, that can feel like trying to mop up oil, water and Gatorade all at once.

So where does Bridge sit?

At Bridge, we have made a big song and dance (and we do love songs and dances, just check out our Bridge Show…) about the issue of IP. We call ourselves IP evangelists – leading the vanguard of IP for 17 years, long before it was on the mainstream radar. We are constantly innovating to understand packet and ST2110 network behaviours more clearly, and deliver that understanding in a way that is intuitive and usable to end users.

So, on the technology adoption curve, we’re clearly innovators, serving the early adopter section of the market, right? 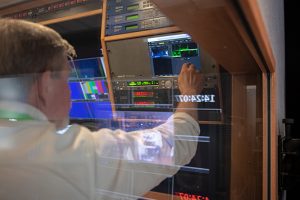 Certainly, monitoring IP-based production and broadcast is where we’re constantly pushing the industry forward, but as our good friends at Haivision discovered in their recent Transformation Report, 40% of production facilities aren’t making any use of IP. Satellite DTC broadcast is still huge. So catering only to current IP user would be very limiting indeed.

And moreover, whilst we do believe in IP, what we really, really believe in is monitoring. So we’d hate for our incredible understanding of network monitoring to be limited to only a small section of the market. We believe more than anything that the integration of effective monitoring into all systems – IP or otherwise – is vital to ensuring QoS, QoE, and thus, bottom-line profitability. Monitoring our message, and it’s not just limited to the ‘IPers’.

Do we believe that ultimately, a move to IP will be on the cards for all broadcasters and production teams somewhere down the line? Well, yes. But do we think that slower-adopters also need to be looked after – monitoring-wise – in the mean time? Absolutely. Especially when they find themselves in a transition/hybrid state, engaging with IP but still retaining some reliance on legacy systems.

It’s not always just a case of  ‘where there’s a will, there’s a way’ 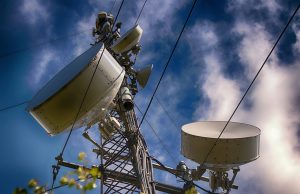 We fundamentally recognize that whilst technology adoption curves may hold relevance in many areas, in industries such as production and broadcast, where the sheer cost of technology revamps across complex networks is prohibitive to constant upgrade, then the issue of being a ‘laggard’ or a ‘leader’ is not one of mindset necessarily, but merely the pragmatism of money and investment availability. Whether it can be on a piecemeal or revolutionary basis, studios and broadcasters often have no choice but to work with the technologies they have, rather than the ones they want.

That’s why we developed ISM (Integrated Services Monitoring). It may not surprise you but the really key word there is Integrated. ISM represents a way of combining our full product range to introduce linked-up monitoring across entire systems of content production, contribution and distribution..

This means that whether you’re pushing ahead in part of your network with IP-based solutions, or still making use of legacy elements, whether the data flow is compressed or uncompressed; there you need no loose links from a monitoring perspective. From embedded systems and software-based probes to software control systems that support all currently commercial available standards and media formats, Bridge’s ISM approach delivers in-depth, intuitive understanding of the end-to-end broadcast process, regardless of how that process is configured.

Doing it for the love of it 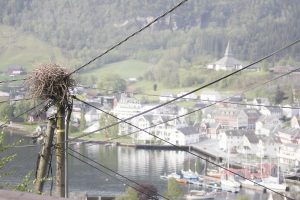 When it comes down to it, it’s all very well talking about ‘strategy’, but the truth of the matter is that it isn’t some market calculation which drives what we do. We haven’t led the market from the front and championed the cause of IP because we felt there was strategic benefit in ‘playing Apple’, nor have we developed monitoring solutions for more conventional and legacy equipment simply because we can mop up the market at the midpoint. We are driven by belief in what we do, and, dare we utter the word… passion. Our engineers innovate simply because it’s what they’re born to do, not because it’s what they’re told to do (really, trying telling them to do anything… it’s rarely successful). And because they believe in the fundamental importance of monitoring, then they’re driven to innovate across the industry, and not just at the IP-leading end of it.

Ultimately, wherever your broadcast network stands on the spectrum of evolution, whether it makes use of IP, OTT, Satellite, Cable or Terrestrial, Bridge has it covered. Because it isn’t just innovation we love, it’s our industry.