Wired for sound (or maybe not…)

The evolution of audio engineering that should be ‘recorded’ in history

One of life’s great annoyances is teenagers that hang out at the back of the bus and blast music through their tinny phone speakers. It’s not annoying because you’d rather be listening to Zeppelin’s Second Album or Wagner’s Tannhäuser – no, it’s not the nature of the music, but the quality that grates so harshly.

But you’ll be unsurprised to hear that it’s been a long road in getting to the stage of immaculate audio that we’ve come to expect in film, TV and music. In this month’s blog, we thought we’d give you a little rundown of the history of audio, if only to help build up your bank of useless pub quiz knowledge.

Where it all began

1877 is generally credited as the birth of recorded audio, and it’s a familiar name linked to that birth: it was Thomas Edison – of lightbulb and Tesla-feud fame – who created the first phonograph, based on little more than a strip of tinfoil wrapped around a spinning cylinder. His track of choice? Mary Had a Little Lamb. Though as with all good science, his breakthrough was built on the back of the work of the grandly named Édouard-Léon Scott de Martinville, and Charles Cross – both who had mastered the idea of recording music, but hadn’t quite figured out how to play it back.

The next big jump was from the cylinders that Edison had been working on, to the gramophone of Emile Berliner – what we’ll eventually come to recognize as a vinyl record. It’s about 25 years later that magnetic recording is developed, and the oldest surviving magnetic recording is of  Emperor Franz Josef of Austria (uncle to the famous Franz Ferdinand), but it won’t be until the 60s that we get the cassette tape.

In 1906, the first possibility of making music really loud (like it should be) was made with the development of the triode vacuum tube, the first electronic signal amplifier. This will of course eventually become vital for the Spinal Tap joke about Amps that go all the way up to 11.

In 1929, audio gets geeky (because we all know engineers are cooler than mathematicians, right?), with Harry Nyquist’s publication of the creatively named “Nyquist Theorem”; a mathematical foundation for the sampling theorem basic to all digital audio processing.

And then in 1931 Alan Blumlein gets to thinking that if we have two ears, maybe we’d like to use them, and essentially patents the idea of stereo, whilst at Bell Labs practical work is underway to cut disks in a way that can actually deliver on that concept, using vertical and lateral cuts. This is a big development.

So too is what occurs in 1940, where Les Paul (of guitar fame) develops multi-track recordings; crucial to the Rock wave that was due to come in the 60s, and first used in film on Disney’s Fantasia.

Big leaps and little steps all move you forward

As with much of technology, after some of these big, ‘revolutionary’ leaps comes a lot of tweaking and refining, pushing the boundaries of what can be done with the fundamental concept. We get various different sizes and type of vinyl disk, and various evolutions in recording, replicating and listening. All the while, audio quality is improving.

And then… the digital revolution. The Compact Disk emerged in the 70s, and music production changed in earnest: digital tools gave sound engineers more creative possibilities than had ever been considered before. And the 90s then gave us Dolby surround sound – remembered by a generation of cinema goers for the  overwhelming wave of sound that used to make your hairs stand up on the back of your neck  before the film started.

From the listening side, we’d worked our way through Walkmans, personal compact disc players and mini disks, and the rise of the MP3 player came about – amazingly – as late as 1998. Digital was not just improving the production capabilities on offer, but the listening mechanisms for audiences.

And finally, of course, hot on the heels of that was to come the internet/communications revolution, taking all of the possibilities of digital and freeing it of geographical constraints. In 1998, Beethoven’s ‘Ode to Joy’ was played at the Winter Olympics by delivering five live audio feeds from five continents to a conductor in Japan, using satellite and ISDN. At the time, a huge feat of technological engineering. Now? Pretty much your average Tuesday for a sound engineer. 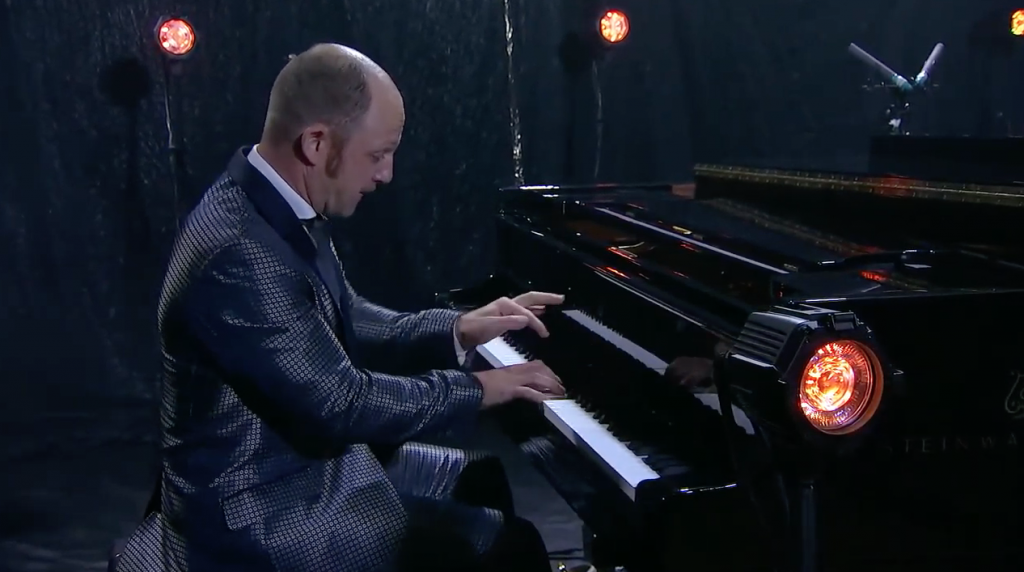 The evolution of a sound engineer

Of course, as this technological change has occurred, it has driven changes in the way the industry functions, and the professionals within it – diverse as their roles, duties and functions are. As electronic audio has opened up a new realm of possibilities, then the nature of the job has become increasingly creative, and not just an exercise in technical detail and refinement.

But what the electrification of audio has really facilitated is a change in where, how and when audio professionals can undertake their work. You might think of an audio engineer sat in a huge studio, in front of an immense mixing deck, buttons and flashing lights everywhere (and the wires… oh so many wires).

And sure, if you have the luxury of space and budget, then all those tools are a godsend. But audio engineers are increasingly being asked to work in unusual circumstances; not only have the events of the past two years meant that often, going into a dedicated studio was impossible and working from home was the only option, but also – increasingly – sound engineers are working on outside broadcast projects. These aren’t just complex in terms of the uncertain and complex conditions surrounding the recording process (you try miking up a presenter in gale force winds…), but also the limitations relating to how and where thee audio can be processed afterwards. Try listening to a complex mix for balance and errors when you’re squeezed into the corner of an OB van and the director is yelling that his macchiato doesn’t have soya milk…

Bridge to the rescue

It’s here that the digital revolution, the IP revolution and Bridge Technologies unite to save the humble audio engineer from a career of less-than-ideal working conditions.

Combined, digital audio and IP-based data transfer grant a sound engineer an indispensable tool: freedom. Freedom to work without the need for extensive equipment, freedom to work from anywhere in the world. Not just remote production, but distributed production – allowing the sound engineer to be back at their home studio in New York, working in a room with perfect acoustics to mix real-time sound from a concert in Stockholm.

Of course, to be able to do this, they need some exceptional, powerful, IP-based production tools. And that’s where Bridge steps in.

Our VB440 has become increasingly recognised in production fields as an absolutely indispensable tool for remote and outside production – allowing OB vans to work remotely from central studios with all the tools they need on-site, or alternatively, allowing individual creatives and technicians to liaise with the OB van and contribute their expertise on a distributed basis from wherever they happen to be based. But until now, the focus has been – to a large extent – on providing insight into the visual nature of production. With the most recent release of the VB440, all that changes.

Well first, the VB440 facilitates the measurement of multichannel audio across 64 channels within one flow (with a service containing as many flows as desired).

Secondly though, we’ve provided some really in-depth visual instruments to give audio engineers both oversight and insight into the ‘nature’ of the audio being recorded and output. These include a microphase meter, which gives a quick assessment of the phase balance of each audio pair, and also a Gonion meter, which can reveal incompatibilities in multi-microphone sound fields. On top of this, there’s a LUFS meter, which visualizes the dynamic range of the audio and allows audio engineers to ensure that audiences experience a full range of sound, from dialogue to explosions, from the pianissimo of a concerto to the roar of a stadium crowd.

One of the great skills involved in creating these instruments for audio is ensuring they have the appropriate ‘ballistics’; in essence ensuring that they deliver insight and measurements which  are precise without being unreadable. At Bridge, this is kind of second nature, because we’re as focused on making our in-depth technologies usable through intuitive, straightforward GUIs as we are in packing them with innovative features and abilities. 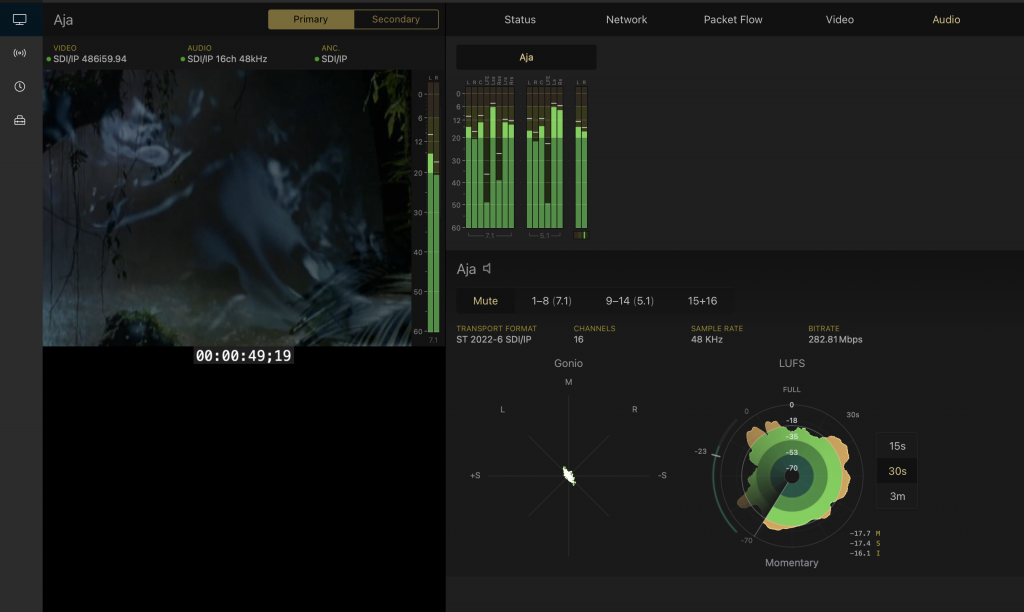 And then there’s perhaps the biggest enhancement we’ve made: the ‘downmix’. It makes sense that whilst audio engineers benefit hugely from visual tools, there’s ultimately one tool they really need to rely on: their ears. But as we touched upon earlier, that can be tricky in environments where the audio engineer is crammed into an OB van and isn’t able to make use of the space and equipment they’d usually have the benefit of, or in situations where they’re on the fly and attempting to mix on the move. In these cases, the downmix takes 7.1 and 5.1 audio and allows for this to be listened in a stereo downmix, through headphones and a HTML-5-based browser – granting incredible flexibility to where and how the audio engineer validates advanced audio formats.

And this flexibility granted by the VB440  is not just a boon for audio engineers; the ability to distribute production specialists around the globe whilst ensuring they have real-time access to both the source material and the tools they need – all in the form of one rack unit accessible from anywhere in the world by browser – means complex productions can benefit from huge cost savings;  eliminating the logistics associated with moving crews and kits to new locations across the world and fitting OB vans with expensive specialist equipment that only performs one or two limited functions. The net result is a hugely improved production environment for significantly less money.

So, when you’re remembering some of the key audio milestones that we’ve covered in this blog, we’d say there’s one more breakthrough in the evolution of audio engineering that should be ‘recorded’ in history: the advent of the VB440 and its incredible audio production abilities.