The Magic of Monitoring and Measurement in Movie Making

Why mistakes make for great movie plots, but terrible productions

In the world of movie making, you want there to be as few mistakes as possible, and modern measurement, monitoring and testing technologies are fundamental to making sure that networks deliver data exactly as they should across a broadcast chain.

But interestingly, in the in-universe world of the movies themselves, mistakes are integral. It is only through mistakes – an upset to the status quo – that our heroes are ever prompted to embark on their journeys in the first place

So what if a perfect monitoring solution had been overseeing the informational flow of our favourite films? Cinema might be an altogether different affair…

Imagine if the glitches that Neo saw in the Matrix hadn’t existed because they’d been identified and rectified in the network right at the start. Neo would still be working a mundane 9-5 as a disillusioned programmer, none-the-wiser of the true nature of his reality; no red pill, no swishy black coat, no bullet dodging.

Minority Report would have been much shorter if broadcast monitoring solutions had been applied to the pre-cog data streams; the network engineers would have spotted the inconsistencies between the portentous broadcasts long before Tom Cruise started running around getting eyeball transplants.

But of course we’re not just limited to sci-fi examples which focus around computers and data. Even the most classic of literature is often based around a failure to get a message (or packet…) where it’s needed. How badly does Romeo and Juliet end just because Friar John fails to deliver Romeo’s letter? The world’s most famous lovebirds would be miserably married with three children now if they’d had the ability to monitor packet delivery in the 16th century.

Whilst in the classic Life of Brian, there would have been far fewer laughs as the comedic set of errors that eventually lead to Brian being mistaken for the Messiah could never have existed; no routing errors for the Wise Men, no failure to identify the true Brian on the cross because of duplicate IP-address assignments.

And finally, how about Star Wars? With the ability of modern monitoring solutions to provide meaningful, insightful data on just every metric that matters – and provide access to it in real-time from any point across the galaxy… we mean, planet, the secret of Luke’s parentage surely wouldn’t have stayed secret for long, even with him residing in the far flung deserts of Tatooine. Naboo wouldn’t have lost signal integrity in the trade blockade, and thus our gallant Jedi knights would never have undertaken a daring escape that eventually led them to Anakin and prompted a whole change to the balance of the Force. And R2D2’s message from Leia wouldn’t be corrupted or misdirected, meaning Luke wouldn’t have embarked on his journey to find the mystical Obi-Wan.

The net result? Luke would have never kissed his sister. (Well yes, there’s also the small issue of the galactic war between good and evil, let’s not forget that). So don’t let anyone ever tell you that the consequence of network and data errors isn’t high stakes… 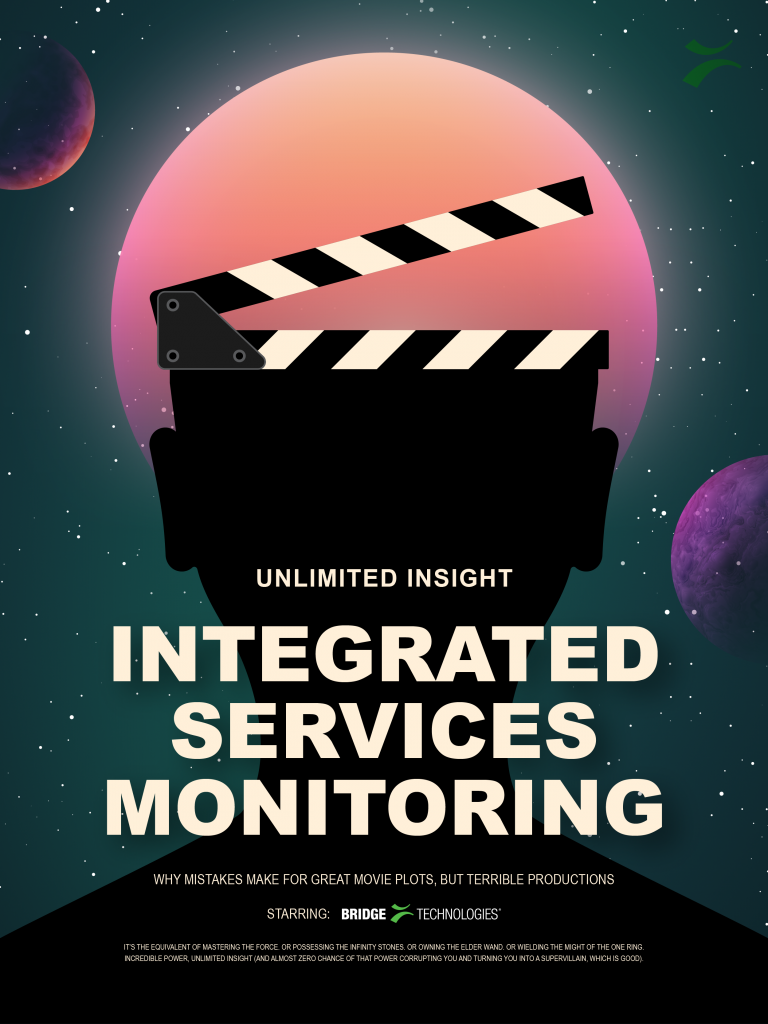 No doubt, these films would have been a lot more boring (and a lot shorter) if data and information hadn’t become corrupted, misdirected or misinterpreted through its journey.

But whilst we love our films to be packed with excitement and explosions, the truth is that in the real world, we tend to favour the easy life.  We think that if you asked a network engineer, they’d take predictability and stability over adventure (at least when it comes to their work…). It’s nice when things work like they should – and a comprehensive, real-time, insightful and intuitive monitoring system makes that a more realizable reality, not a work of science fiction.

But achieving that stability and certainty needs the right knowledge, and the right tools. With a joined up, end-to-end solution like that found in Bridge Technologies’ ISM (Integrated Services Monitoring) approach, broadcasters are able to maintain oversight of their entire media chain; from production to distribution, across hybrid terrestrial, IP, OTT, SDI and satellite infrastructures, making use of both compressed and uncompressed data, with metrics that facilitate both in-the-moment troubleshooting decisions, and longer term, strategic management choices.

To keep the movie analogy going, it’s the equivalent of mastering the Force. Or possessing the Infinity Stones. Or owning the Elder Wand. Or wielding the might of the One Ring. Incredible power, unlimited insight (and almost zero chance of that power corrupting you and turning you into a supervillain, which is good).

Indeed, it’s not only network engineers and studio executives who can benefit from the easy life; it’s the production team sitting right at the heart of the movie-making process too. The rise of remote broadcast and distributed production processes – facilitated in great part through the adoption of IP-based standards – mean that the ability to measure and monitor data flows becomes even more indispensable than ever before. Not limited to error detection and problem avoidance, the integration of M&M becomes a creative tool that allows production specialists – be they camera painters, audio engineers or producers – to make aesthetic and technical decisions in real-time, from anywhere in the world.

So whilst advanced network monitoring solutions might be vital in the world of film production, for now we can be glad that the exceptional reliability and consistency that they bring has stayed out of our fictional film worlds – otherwise cinema would be a very boring affair indeed.